Watch an overview of new features in SnapGene 6.0 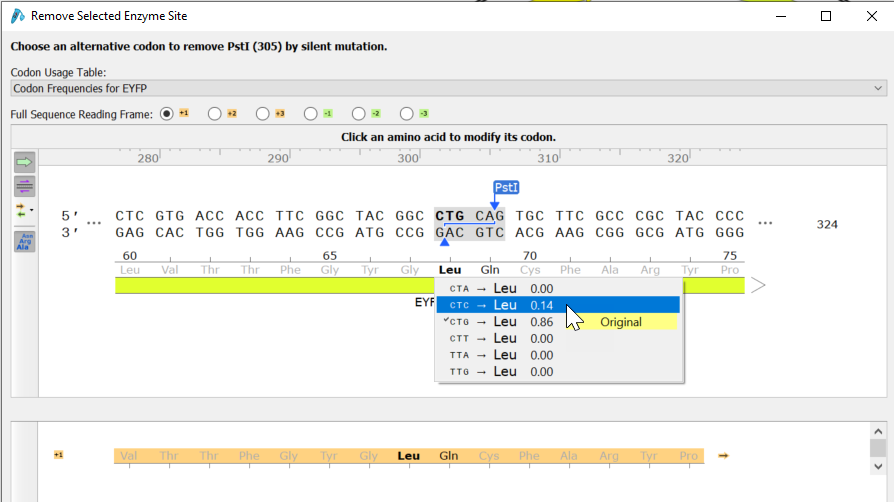 Restriction enzyme sites can now be automatically added or removed from a coding sequence by silent mutation.

The set of available feature types can now be extended to include custom types (non-GenBank), and default feature colors can be changed. 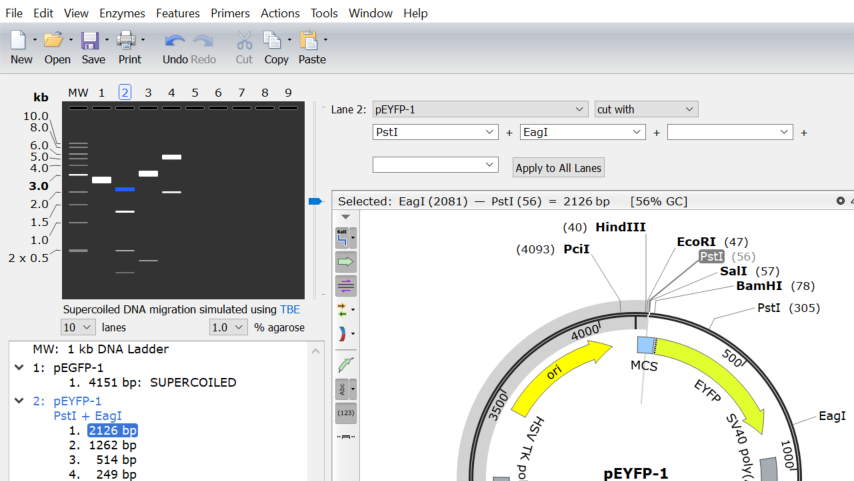 Agarose gel simulations can now be saved as .gel files, allowing gels to be viewed and edited later or shared with others. 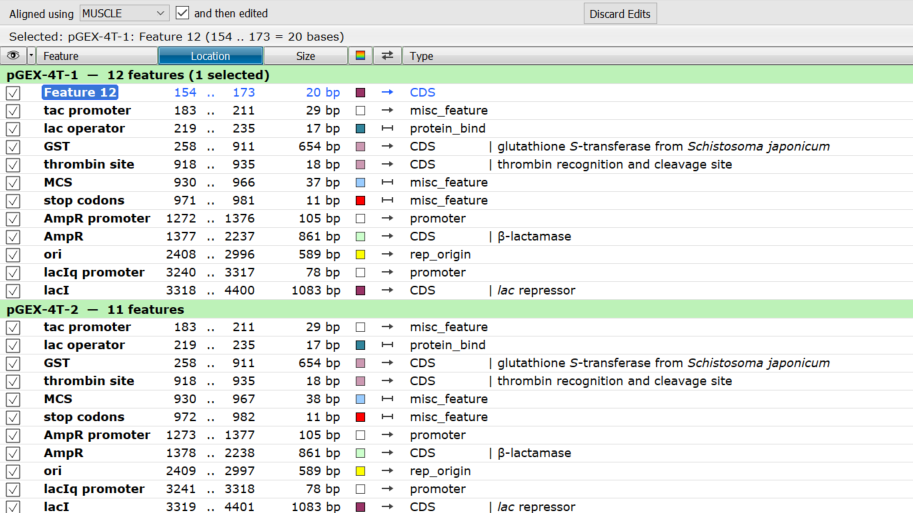 Editable features are now fully supported in both pairwise and multiple sequence alignments, with the ability to add, edit, and search from either the Alignment view or the new Features view. 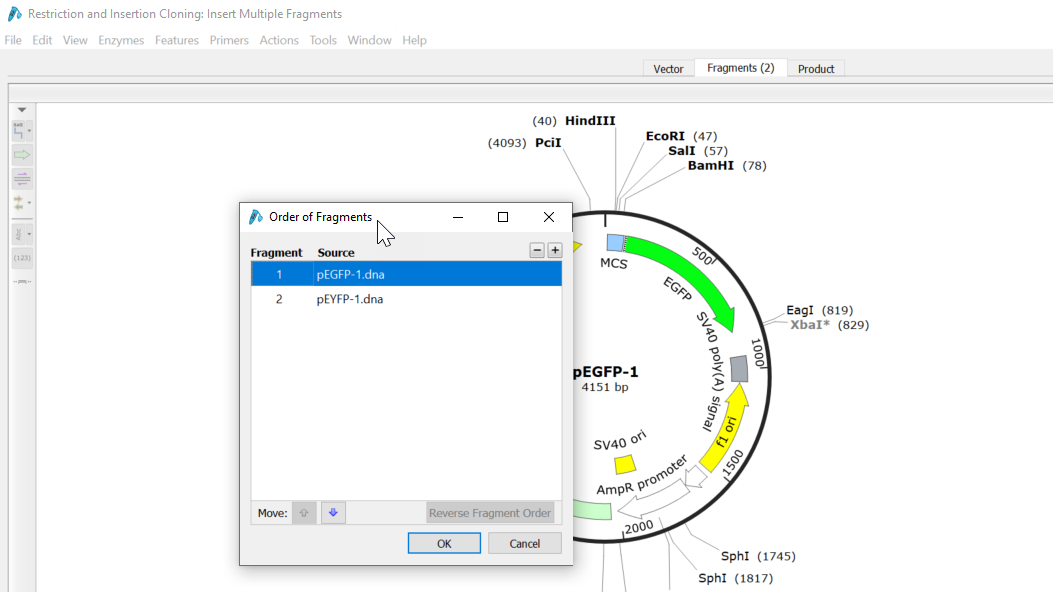 Watch for an overview of the new features in SnapGene 5.3 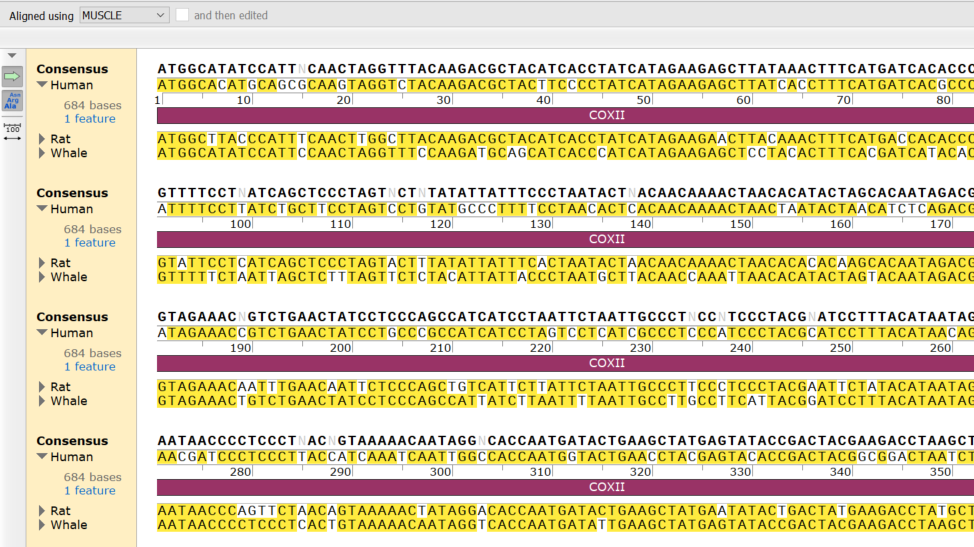 Features in the input sequences are carried through to the alignment, allowing you to visualize aligned regions in context. 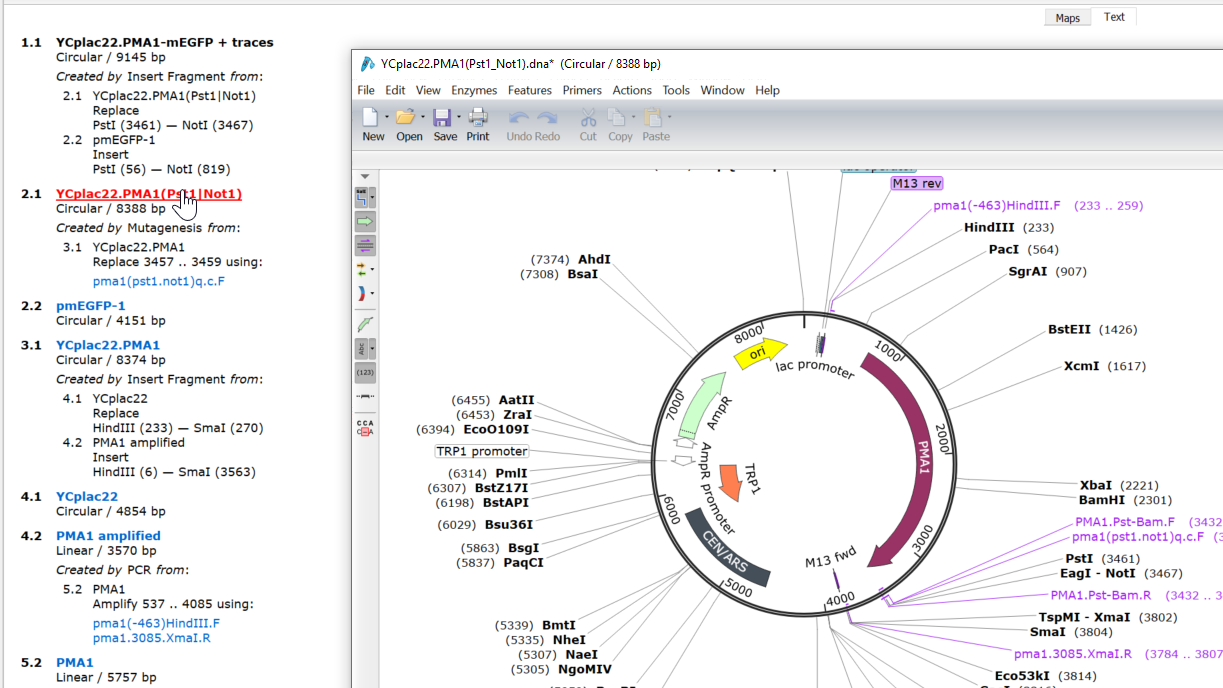 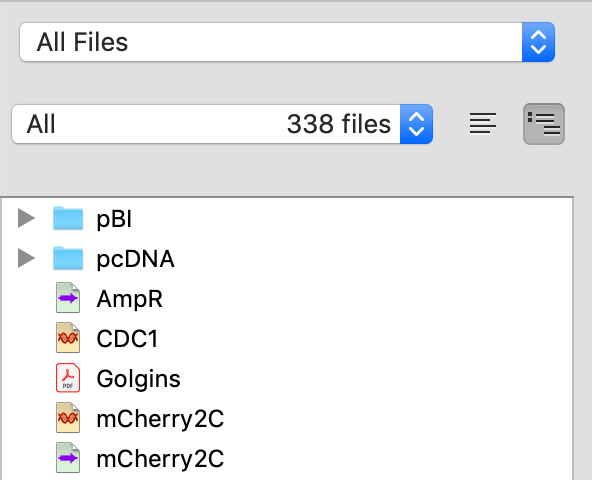 New ‘All Files’ Area in Collections

Organize all of your DNA, RNA, and protein files within a single list or folder tree in a Collection, and add new folders across the different areas in a single step. 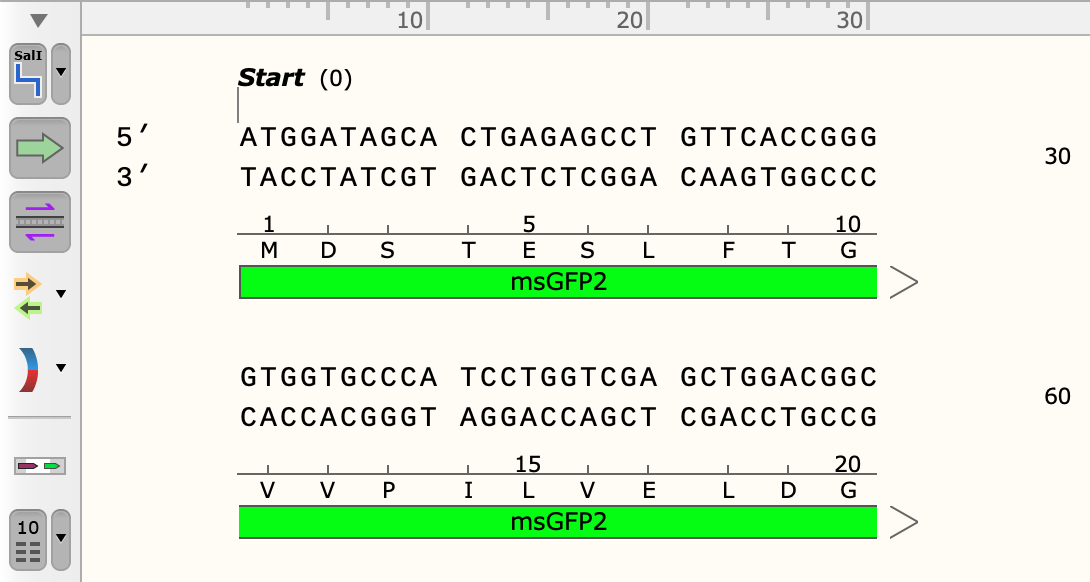 View Sequences in Blocks of 3 or 10 Residues

New layout options allow sequences to be displayed with gaps every 3rd or 10th base. 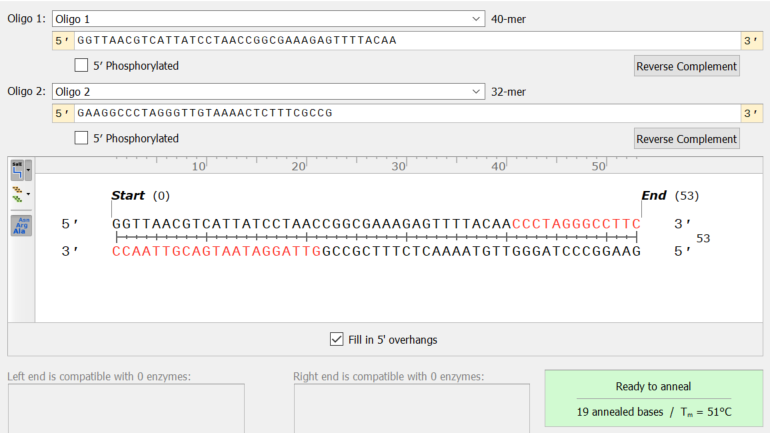 Overlap two oligos, and then convert to double-stranded DNA in a single step by filling in the overhangs.

A DNA sequence can now be annotated with primers that anneal at the 5’ end but not the 3’ end. 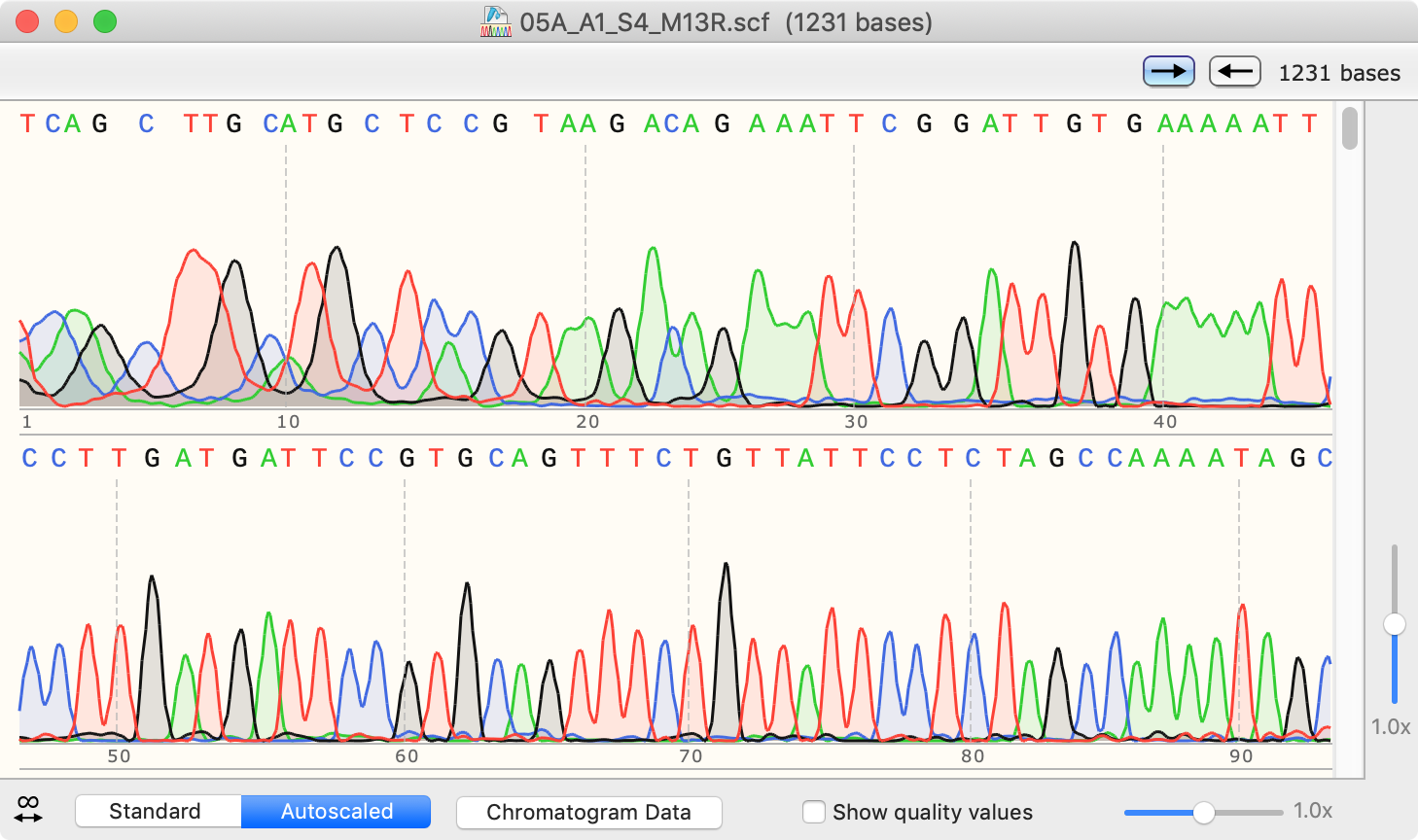 Display and print a chromatogram in multi-line format to view the trace more efficiently.

Watch for an overview of the new features in SnapGene 5.2

A GC content color or line plot can now be displayed in Map view, and bases can be colored by GC or AT in Sequence view.

When searching for DNA sequences, imperfect matches containing gaps or mismatched bases can be found, and search performance has been optimized. 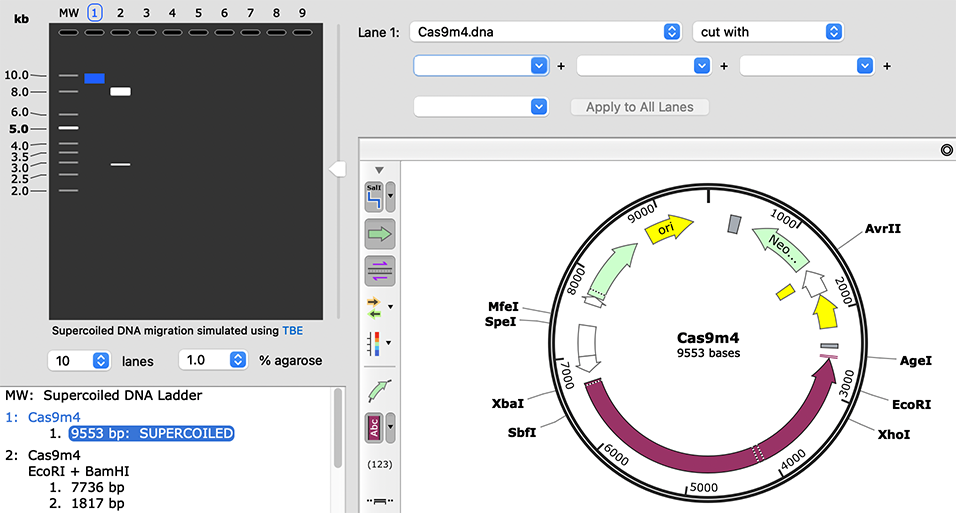 When simulating agarose gels, the migration of uncut circular sequences can be visualized, and supercoiled MW markers can be used. 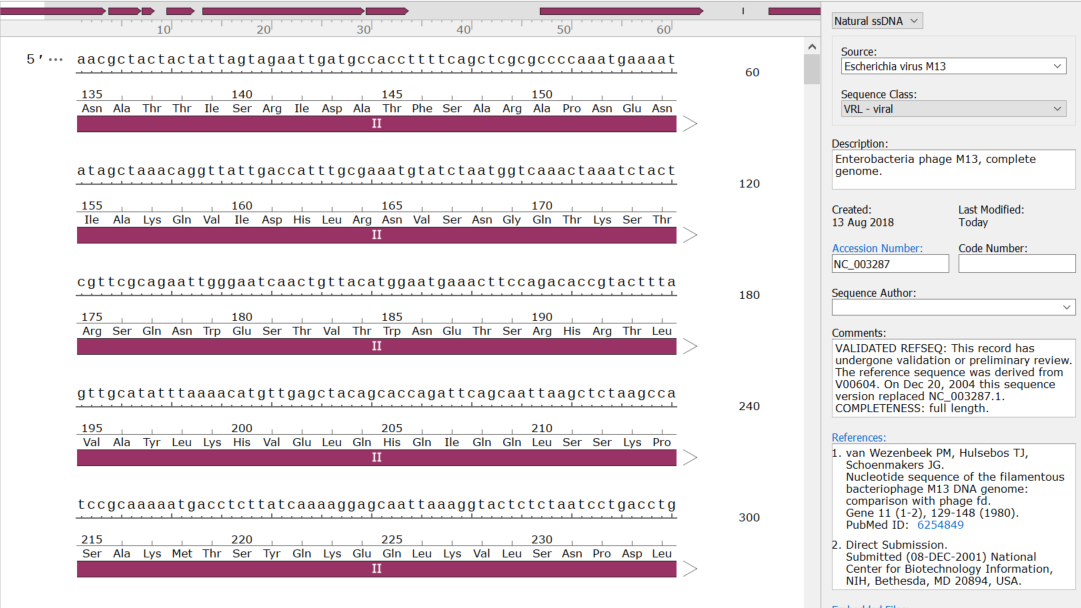 A single-stranded DNA (ssDNA) sequence can now be created or imported, with support for feature annotation and sequence manipulations. 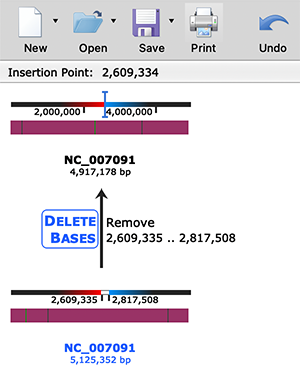 When editing sequences, the history is compressed to allow efficient storage as well as Undo for large sequences. 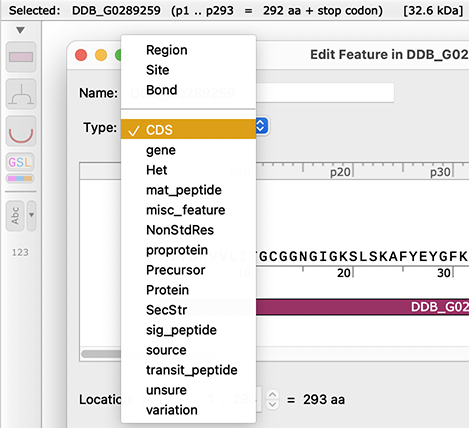 The set of supported protein feature types has been extended, including support for the misc_feature type. 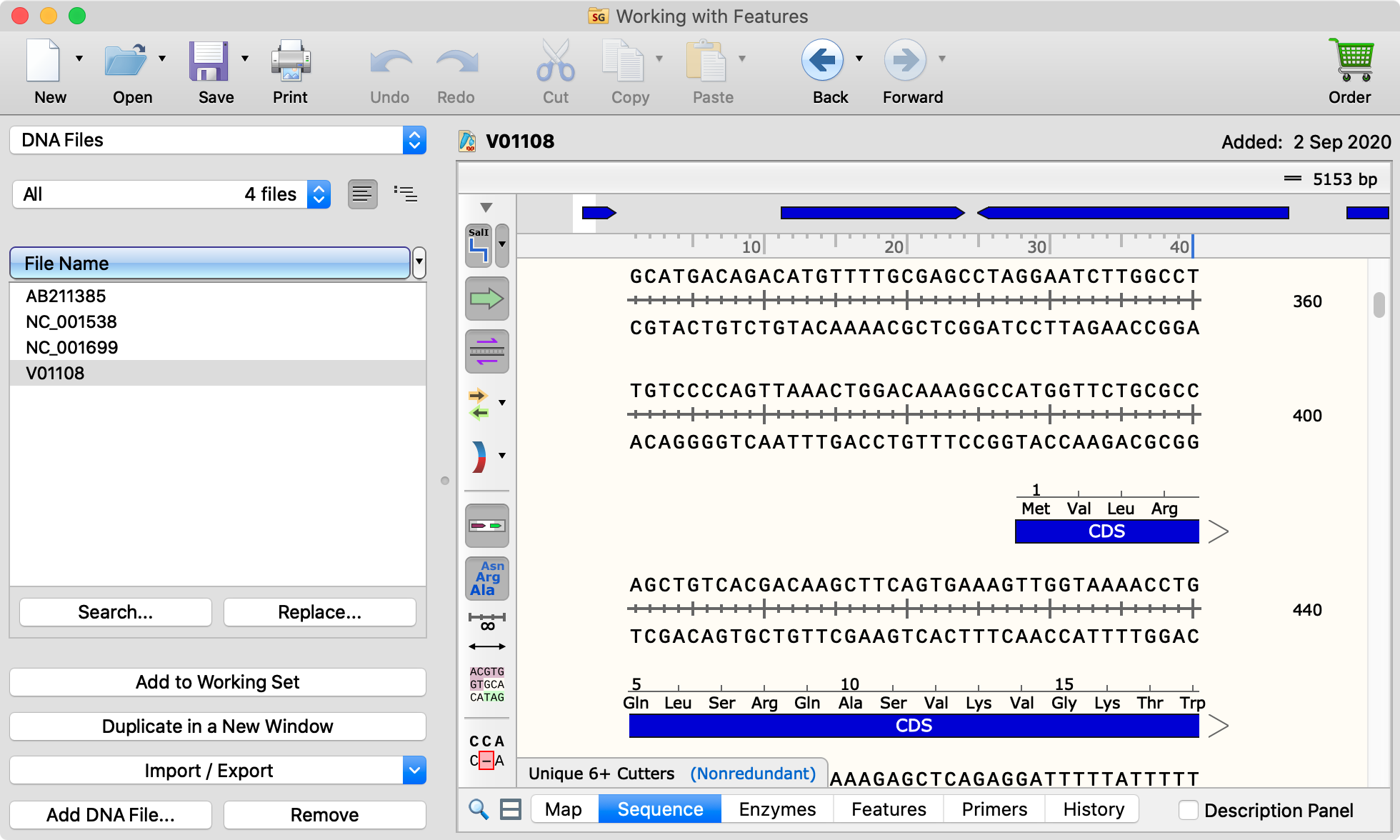 Sequencher files can now be imported into a SnapGene collection.

SnapGene 5.1 provides enhanced flexibility for displaying and annotating sequences. Highlights include an improved layout for linear maps, an optional split view for sequence windows, more versatile controls for enzyme visibility, and links between related folders in different areas of a SnapGene collection.

Enzyme sites and other annotations in a linear map are now allowed to overlap, thereby reducing map height while preserving legibility. 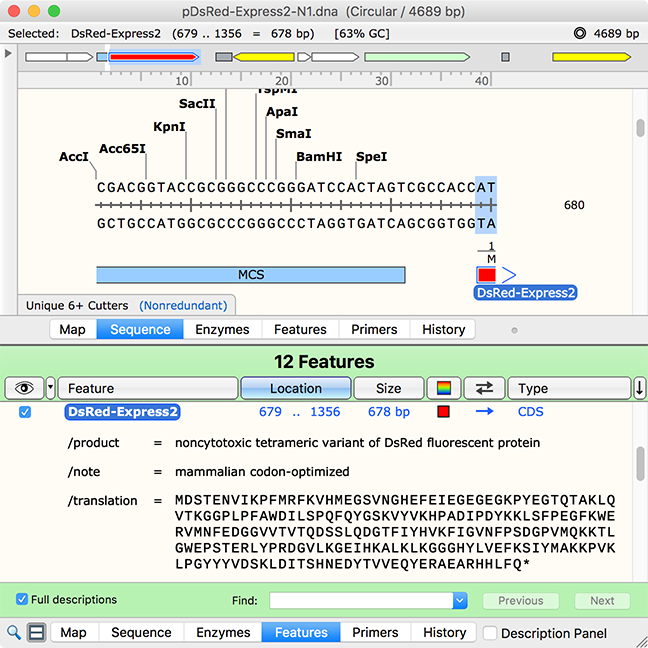 A DNA or protein sequence window can be split to show two different views, or two versions of the same view. 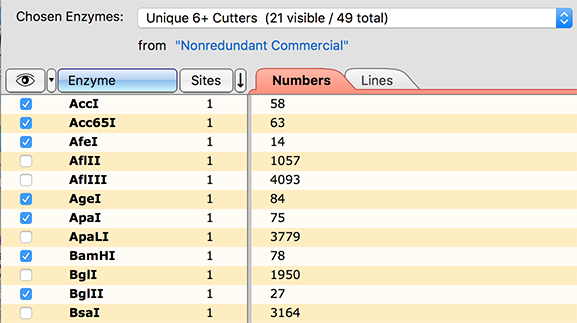 Like features and primers, individual enzymes can now be shown or hidden using check boxes. 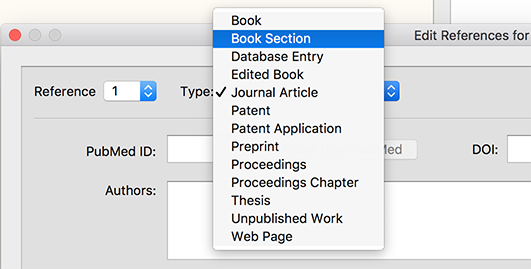 When adding references to the Description Panel, a variety of reference types are now available.

When importing features from another SnapGene file or detecting common features, the match threshold can be adjusted between 80-100%.

Optional Stripes for “A” Traces

In a sequence trace file, the “A” trace can be displayed with stripes to support researchers with color vision disabilities. 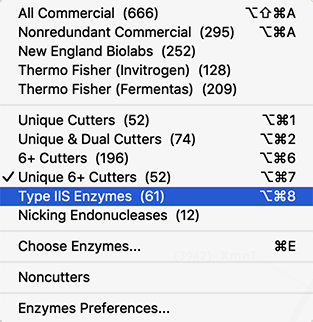 Type IIS enzymes, which are used for Golden Gate assembly, can be displayed using a pre-defined enzyme set.

SnapGene 5.0 adds new capabilities and display options including pairwise alignment, import from the Ensembl database, support for directional TOPO cloning, and improved tools for alignment to a reference DNA sequence.

Pairs of DNA or protein sequences can be analyzed by local, global, or semi-global alignment.

Gene or transcript data from the Ensembl genome browser can now be imported directly into SnapGene. 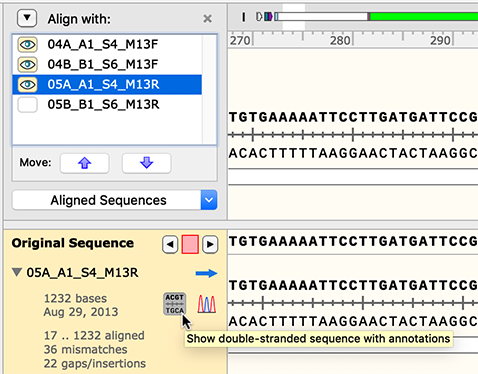 Flexible Alignment to a Reference

The interface for aligning to a reference DNA sequence has been enhanced. Controls for various display options are more intuitive, and alignment can be restricted to a designated strand or region of the reference sequence.

For a sequence that has been partially aligned to a reference DNA sequence, the nonaligned end portions can now be dragged out and visualized. 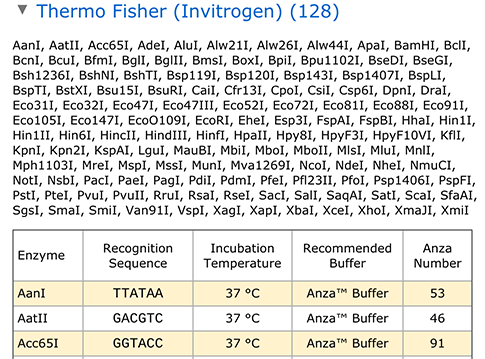 The Anza™ enzyme system from Thermo Fisher (Invitrogen) has been incorporated into SnapGene’s enzyme database.

The background color for the SnapGene interface can be changed. 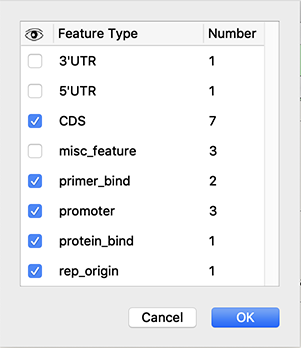 Features can be shown or hidden based on feature type. 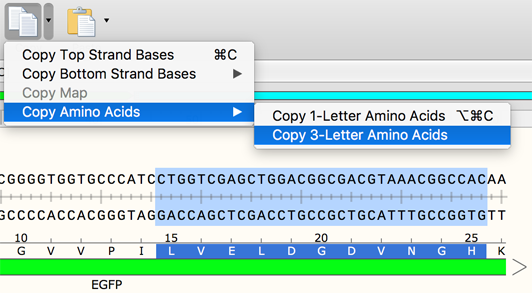 Amino acids in a translated feature can be set to lowercase, and a stretch of amino acids can be copied in 3-letter format.

A codon frequencies table can be generated for one or more translated features.

A selected region of a DNA alignment can be translated to generate the corresponding protein alignment.

Intron Annotation for an Aligned cDNA

When a cDNA is aligned to a reference genomic DNA sequence, the cDNA can be used to create a feature in which gaps are annotated as introns. 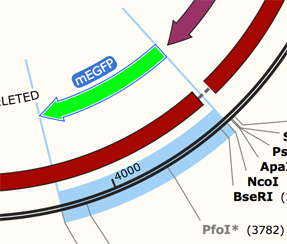 Selections are now marked with extended lines, which clarify the selection endpoints and also enhance visibility for small selections.